The 5 Corners Buskers Festival is back and the laughs are going to be bigger and better than ever. This September, get ready to laugh all day and night in White Rock. 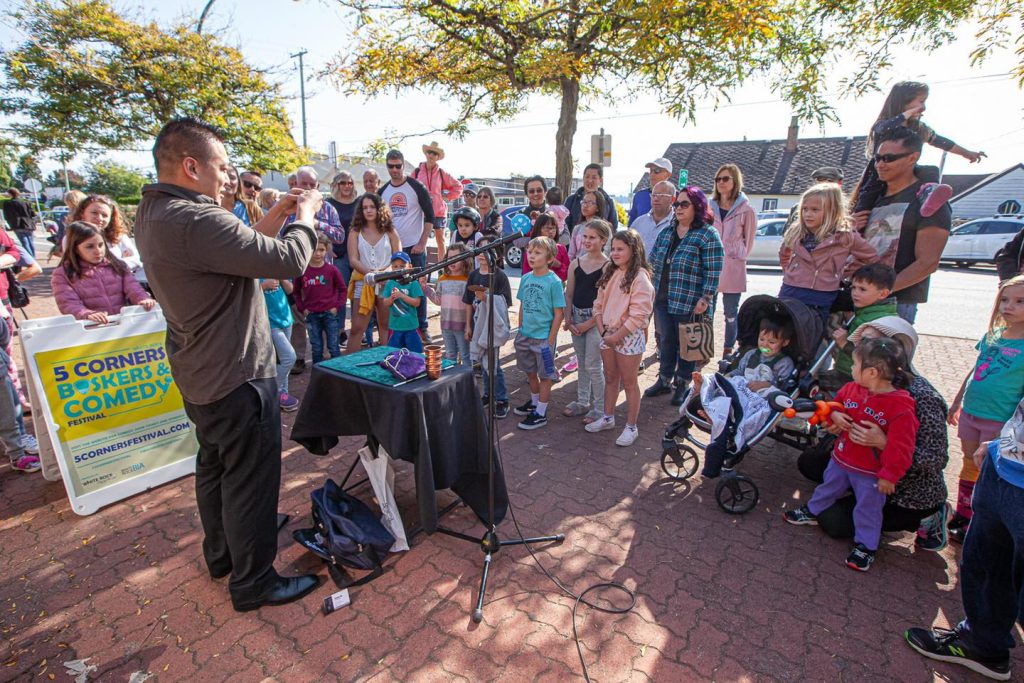 All day on Saturday, September 10 watch for free street busking performances featuring circus acts, musicians and amazing magicians as they perform at various outdoor venues around White Rock’s Uptown and Five Corners districts. Buskers will include old-time musical performances by Paul Silveria (known to share the stories behind the music and encouraging people to sing and dance along);  singer, guitarist, humorist, and Surrey-local, Duncan Minnett (who creates musical magic with his loop-pedal performance techniques); and the old-time, Appalachian, folk performances of the Hillbetty’s.

Adding a little spectacle and amazement to the daytime busking performances will be the incredible, and mind-blowing magic of award-winning magician Travis Bernhardt; the incredibly talented circus performers from NZR Productions and surprise appearances by some of our favourite fictional characters from Out of the Rain Character Events.

Click here for a complete schedule of daytime performances.

The laughs go all night long on September 9 and 10 as North America’s most hilarious comedy acts take to the stage at businesses around White Rock for a series of ticketed comedy shows aimed specifically at adults. Comedians who will be performing come with impressive comedic resumes and include; Canadian Comedy Award nominees Erica Sigurdson and John Cullen; Jacob Samuel who won a Juno Award for “Comedy Album of the Year”;  David Milchard of the Comic Strippers fame and the viral YouTube series “Convos with my two-year-old”; and Chris Griffin who is one of the only Canadian comics to ever make the finals of the prestigious San Francisco International Comedy Competition.

For more information on the 5 Corners Buskers & Comedy Festival, including a full list of activities, comedy shows, and ticket links please visit http://5cornersfestival.com