Vocalist Karin Plato should be a household name and jazz & blues is her game!

Karin and the most handsome band in the land will be gracing the Blue Frog Stage on September 14th performing a diverse program of music celebrating a brand-new record release “This Could Be the One” which includes several of Karin’s original songs and some arrangements of pop, folk and country tunes.

Karin is a Juno award nominee and a Western Canadian Music Awards nominee. Three times she was nominated Jazz Vocalist of the Year at The National Jazz Awards in Toronto. She has appeared at concerts and festivals across Canada and has performed at concert societies in the USA.
​
The band features: Mr.Tall & lean (better than mean) clarinetist James Danderfer; quick witted and in demand (but not demanding) pianist Chris Gestrin; the Dashing Dane bassist Laurence Mollerup; and coolest of the cool, Joe Poole on drums. Joining the band will be enchanting vocalist Rebecca Shoichet singing a few duets with Karin and king of the slide trombonist Rod Murray.
The Edmonton Journals says “Plato’s confident, tuneful phrasing and hip articulation stands out as she weaves a musical spell…”

Come enjoy an evening of music that will transport and move you and enrich your soul.
www.karinplato.com 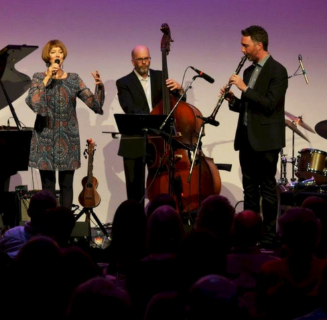