We Three Queens is comprised of three of Canada’s finest jazz vocalists. Well-known as solo performing and recording artists, Vancouver’s Jennifer Scott, Karin Plato and Kate Hammett-Vaughan have been singing holiday music together for almost a decade. Their ever-growing repertoire includes classic carols, holiday favourites, carols from around the world, and even some original songs.

In 2012 they recorded a CD called Happy Holiday. The CD sales go to support the Vancouver Firefighters Burn Charity. The Queens, as their fans call them, were a huge annual hit at the now-defunct Cellar Jazz Club, and this year they are branching out to perform at Blue Frog Studios.

We Three Queens will be performing with an all-star band consisting of Chris Sigerson on piano, Rene Worst on bass and Tom Foster playing drums. 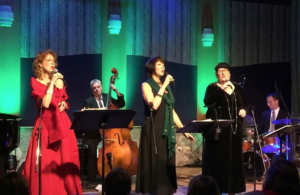