Sea of Stories: On until August 26

Peninsula Productions’ new original production, “Sea of Stories” is sure to leave you feeling nostalgic, no matter what small town in Canada you may call home. 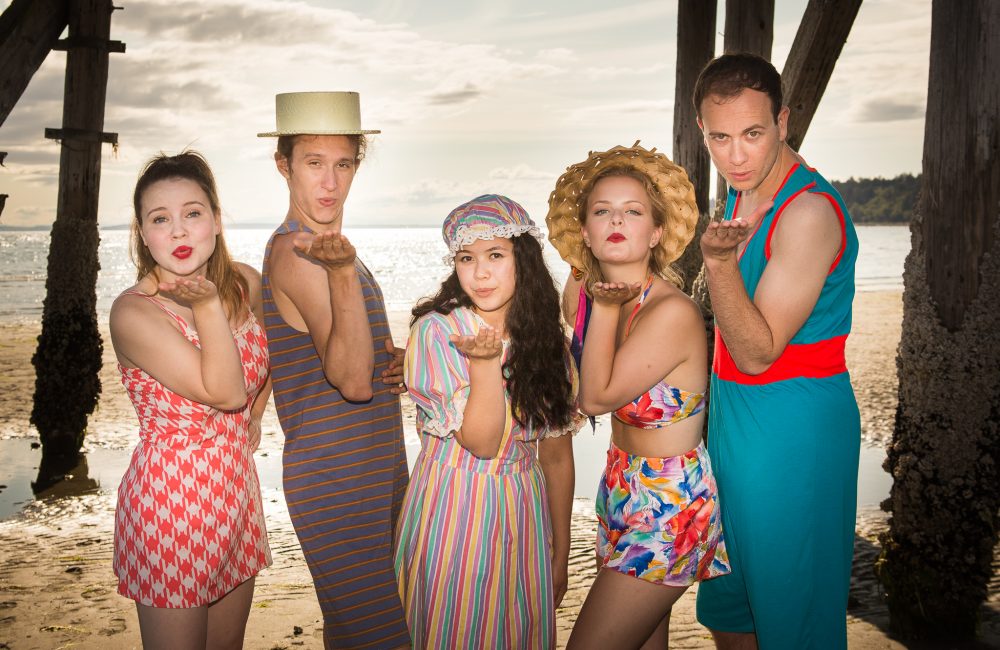 The hit musical’s debut run at the Coast Capital Playhouse Theatre in White Rock lasts from August 9th to the 26th.

Written by Shawn Macdonald, accompanied by an original score by Dominik Heins and all under the fabulous direction of Wendy Bollard the show is presented by one of our local theatre companies Peninsula Productions.

The play begins with Demi God Xya’as who explains the legend of the famous White Rock and tells the story of how the Semiahmoo people started their tribe on the land beside the sea. The scene then advances to present day, where main characters, Mom, Anita and son, Jeffrey move to White Rock to be closer to Grandmother, Ellen. Jeffrey, the bored teenager who is not pleased with the small-town feel, is encouraged by his mother to join clubs and explore their new city, while Ellen reminisces on her fun times in White Rock as a teenager. Throughout the story, Anita, Jeffrey and Ellen adjust to their new lifestyle while alternating scenes of historical moments. Anecdotal memories made in White Rock unfold through wistful flashback scenes and passionate songs. Throughout the show, there is emphasis on the Semiahmoo people and the significance of First Nations people in our province. The message and information was incorporated well into the storyline in a fun, creative and educational way.

We found the acting, singing and choreography of this production to be spectacular. The show features a talented cast with vibrant energy. In the songs, the vocal quality was fantastic both from the leads and ensemble. The cast is clearly a group of hard working actors who deeply immersed themselves into not only their characters, but the varying time periods featured. As far as staging, the choreography was fun, strong and exciting. The blocking was creatively eye catching, with great quick scene changes and fun character movement in between.

As for the musical numbers, we really appreciated the live orchestra and original song lyrics. With so many songs, some comical and some heartwarming, it’s hard to pick a favorite! They were executed very well vocally and emotionally by the performers. The touching song sung by a young Ellen going to watch the train in the evenings with her family really pulled on the heart strings for us White Rock born and raised, and I’m sure created much nostalgia for many members in the audience as well. And of course, the main theme number “Sea of stories” had us in awe, and has been humming in our heads since.

The set design of this production was simple but very effective. The background screen set was creative and enticing, while being efficient for the many different sets. The waves, smoke, various landscapes and old White Rock photos all appearing on the background screen made for effective scene changes, served to enhance the mood and also acted as good distractions during the scene changes. In addition, the costumes were very vibrant and colorful, especially those from the flashback scenes such as the swimsuits and the poodle skirts. The period costumes really made the scenes!

We truly had a lot of fun watching this production! We loved every bit of it, and were either smiling, tearing up, or singing along. As White Rock locals, we may be a little biased, but we found the whole theme of the play heartwarming and impressively original. It was creative, educational, exciting, informative, and touching. With a total community feel, it’s a charming show that locals and non-locals of all ages can enjoy and connect with, while truly learning the passion that those of us from White Rock have for our city by the sea.

Tickets: $13 for students / $22 for seniors / $27 for adults at peninsulaproductions.org