BRENT PARKIN WITH CIRCUS IN FLAMES

Don’t miss two legends of the Canadian music scene as they team up for an unforgettable night of music.

Brent Parkin is a guitar player, singer songwriter and veteran of the Winnipeg Music Scene, playing for audiences across Canada for over forty years. He has been part of the back up band for such greats as Bo Diddley, Gate Mouth Brown, Otis Rush, Johnnie Johnson and has opened shows for such legends as James Cotton, Johnny Winter, Buddy Guy and John Prine. A career highlight was sharing the stage and tour bus with the Legend BB King as the opening act on a Canadian tour in 1983. Honours include a 1993 Juno Award for his performance on the Saturday Night Blues Compilation, 2011 Western Canada Music Award Nomination for his CD Vintage Rhythm and numerous Maple Blues Nominations including three nominations for Blues with a Feeling Award (Lifetime Achievement).

In a career that began with Shanghai Dog in Vancouver’s independent music scene of the early Eighties, Doug Andrew has shared bills with everyone from The Ramones to Raffi to Ramblin’ Jack Elliott.  He is recognized as an accomplished singer-songwriter respected by critics, peers and music fans alike.  The Edmonton Journal has described his songs as having “slightly twisted, always interesting storyline lyrics” delivered “with an energetic thrust that falls just shy of reckless abandon.”  SEE Magazine has said his songs “should shuffle him off into the Canadian musical songwriting hierarchy” and the Vancouver Province declared “Andrew is a great songwriter …while The Circus In Flames are his extraordinarily sympathetic band…a weird mix of musical eclecticism built on a dark folklore.”
Andrew first formed The Circus In Flames when asked to play at a friend’s St. Patrick’s Day bash in the mid-Nineties and since then the band has toured, played several music festivals and released critically acclaimed recordings:
The Circus In Flames
– “Four-stars” (All Music Guide)
– “A strong argument for indie release of the year” (Dirty Linen)
A Little Bit of Gasoline
– “Brilliant. 9 out of 10” (Americana UK)

In 2007 the group joined such artists as Gordon Lightfoot, Blue Rodeo and former Byrd, Chris Hillman on Stony Plain’s The Gift: A Tribute To Ian Tyson.  The Toronto Star chose The Circus In Flames version of the classic Someday Soon as the album’s Top Track.
Most recently, Northern Electric Sound released the latest recording by The Circus In Flames called Outside America.  In his review, Stuart Derdeyn of the Vancouver Sun wrote, “Andrew is a fine songwriter comfortable working in many styles and his original garage string band music of the Canadian south just keeps on getting better” while veteran Canadian music critic, Tom Harrison echoed, “With Outside America, Doug Andrew once again has stated the case for being one of Vancouver’s best songwriters.”
Andrew called on long time band member Brian Barr to again co-produce and play mandolin and electric guitar.  Ed Goodine plays drums and making his debut on banjitar is Brian Thalken.  Upright bassist Bernie Addington, who played on the self-titled Circus In Flames debut album, reunites with the band in the studio while his brother Phil Addington grabbed his electric bass and became the latest musician to run away and join The Circus.
​
“Sheet metal country,” Doug Andrew describes the music. “It bangs and rattles and booms, generally making a fair amount of noise, but it can also be light and quiet.  It can go from sounding like a runaway locomotive thundering down the mountain without any brakes to a wind slipping through the forest at midnight.” 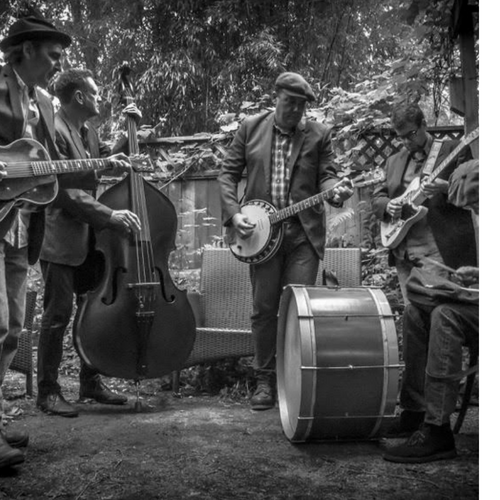