Wishbone Ash, the originator of twin guitar melodic solos, will offer their North American fans a dynamic concert experience on the 2018 “Tough & Tender” Tour. In addition to the high-powered, all-out rockers the band is known for delivering, the guys will turn down the volume (but not the intensity) and treat audiences to acoustic versions of some of their classic hits.

“A great song is a great song, however it’s delivered,” says bandleader Andy Powell (guitar, lead vocals). “Playing acoustically allows people to hear the ‘bones’ of a song and how it might have been conceived in the first place.”

Formed in 1969, Wishbone Ash finds itself in rare company these days. Not many bands are still going strong after nearly 50 years. It takes a serious lifetime of commitment to the craft of making music; but, more importantly, real skill is required to navigate the shifting seas of the music industry, and few know that better than Powell.

“We laid down strong musical roots in the ’70s, and these roots continue to prove productive,” he says. “Also, we nurtured our fan base as much as possible through fan club conventions, newsletters and the like; but this was all given a great boost once the digital age came into being, with websites and social media.”

Through the years the band has delved into various musical genres, from folk, blues and jazz to pedal-to-the-metal rock and electronica. Whatever the style, Wishbone Ash’s hallmark is the distinctive twin-melodic lead guitar interplay that has influenced such bands as Thin Lizzy, Lynyrd Skynyrd, Iron Maiden and, more recently, Opeth.

True road warriors, each year the band logs around 30,000 miles, roughly equivalent to circumnavigating the earth. “The hours, days and weeks we spend touring and recording results in a close-knit group, for sure,” says Powell. “It allows us to bring a level of intensity to the table that people seem to pick up on and appreciate.”

“Our concept was to root my musical story and that of the band’s to the times in which I came of age,” says Powell. “That is to say, relating it to those times, decade by decade, so that the reader could get a picture of how I was impacted by the social and musical trends and how I weathered those changes. We also wanted to keep it breezy and poke a little fun at this music game at the same time.”

In addition to the “Tough & Tender” Tour, the Spring 2018 will also see the release of a 32-CD deluxe box set, “Wishbone Ash – The Vintage Years,” on Snapper Music.
​
There is no other rock band in history that has done more with the twin guitar concept than The Ash. 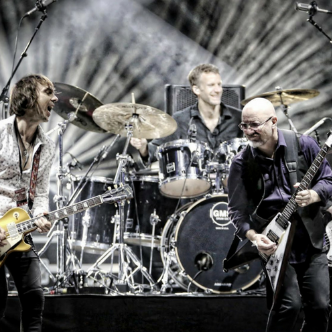